This scrappy landscape juniper was part of a massive juniper mass that was removed from a mature landscape. We collected this tree in March of 2015. It was potted in the formica pot that is currently in with pumice and red lava mix. It was fertilized heavily about a month later and throughout the summer and fall and during the growing season of last year. I first wired it on July 4th of last year and continued to wire it again last November. It’s been very cold here in the last couple weeks and just recently warmed up. I was able to work on the tree a little bit more by adjusting some of the branches, light pruning, and cleaning up the deadwood. I will continue to feed the tree this year and hopefully repot it next year in a smaller ceramic pot. 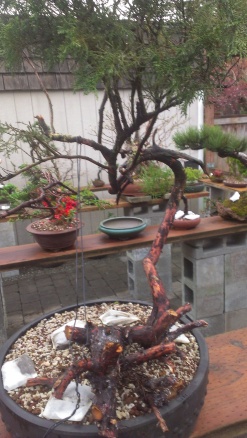 One thought on “Landscape Juniper Progression”